The site contains descriptions and contact information for each core, as well as a new searchable database of services and instrumentation (courtesy of the UCLA-DOE Institute Bioinformatics and Computational Core Technology Center).

Approach borrows from technique of inhibiting protein fibers that cause Alzheimer’s and Parkinson’s diseases
* High-grade serous ovarian cancers are aggressive tumors, and most patients relapse despite standard therapy
* UCLA researchers developed a peptide that penetrates cancer cells and stops their growth by restoring the protective function of the p53 protein
* Scientists hope to test this therapeutic approach to treat women with ovarian cancer in the near future

UCLA scientists have developed a promising novel method to treat gynecologic tumors. The approach focuses on a protein called p53, which is commonly mutated in women who have high-grade serous ovarian cancer, the deadliest form of reproductive cancer. In many women with the disease, the cancer is very advanced by the time it is diagnosed and is therefore difficult to treat.

END_OF_DOCUMENT_TOKEN_TO_BE_REPLACED

Abstract of the manuscript:

The tetrameric thyroxine-transport protein transthyretin (TTR) forms amyloid fibrils upon dissociation and monomer unfolding. The aggregation of transthyretin has been reported as the cause of the life-threatening transthyretin amyloidosis. The standard treatment of familial cases of TTR amyloidosis has been liver transplantation. Although aggregation-preventing strategies involving ligands are known, understanding the mechanism of TTR aggregation can lead to additional inhibition approaches. Several models of TTR amyloid fibrils have been proposed, but the segments that drive aggregation of the protein have remained unknown. Here we identify beta-strands F and H as necessary for TTR aggregation. Based on the crystal structures of these segments, we designed two non-natural peptide inhibitors that block aggregation. This work provides the first characterization of peptide inhibitors for TTR aggregation, establishing a novel therapeutic strategy

The Legacy Award honors outstanding MBI faculty mentors who have worked to inspire, encourage and guide the next generation of scientists and thought leaders.Professor Eisenberg is a Distinguished Professor of Chemistry and Biochemistry and of Biological Chemistry, an HHMI investigator, and the inaugural Chair Holder of the Paul D. Boyer Professorship in Molecular Biology Biochemistry. He served as director of the UCLA-DOE Institute for Genomics and Proteomics from 1993 to 2014. Three Postdocs from MBI Labs were recipients of the 2015 Postdoc Awards.

The events was held on Oct. 9th at the California NanoSystems Institute (CNSI).

More information can be found here 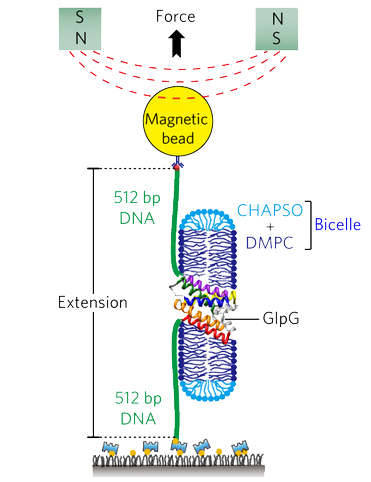 A collaboration between Bowie Laboratory and  a research team led by Tae-Young Yoon of the Department of Physics at the Korea Advanced Institute of Science and Technology has employed  the use of a magnetic tweezer to “quantitatively map the folding energy landscape, the folding kinetic rate, and folding intermediates of a membrane protein in a membrane environment for the first time.” (Phys.org)

Members of Bowie lab have provided the following abstract and external links:

Membrane proteins are designed to fold and function in a lipid membrane, yet folding experiments within a native membrane environment are challenging to design. Here we show that single molecule forced unfolding experiments can be adapted to study helical membrane protein folding under native-like bicelle conditions. Applying force using magnetic tweezers, we find that a transmembrane helix protein, E. coli rhomboid protease GlpG, unfolds in a highly cooperative manner, largely unraveling as one physical unit in response to mechanical tension above 25 pN. Considerable hysteresis is observed, with refolding occurring only at forces below 5 pN. Characterizing the energy landscape reveals only modest thermodynamic stability (DG = 6.5 kBT) but a large unfolding barrier (21.3 kBT) that can maintain the protein in a folded state for long periods of time (t1/2 ~3.5 hrs). The observed energy landscape may have evolved to limit the existence of troublesome partially unfolded states and impart rigidity to the structure.

“Protein aggregates associated with neurodegenerative disease have stubbornly resisted researchers’ efforts to get a good look at them. They refuse to crystallize well or yield to standard spectroscopic techniques. Now, advances in electron microscopy methods are forcing these molecules to give up their secrets. In the September 9 Nature, researchers led by David Eisenberg at the University of California, Los Angeles, and Tamir Gonen at the Howard Hughes Medical Institute’s Janelia Research Campus in Ashburn, Virginia, offer the closest look yet at the core of α-synuclein aggregates. The researchers made microscopic crystals from the peptides and used a relatively new technique called micro-electron diffraction to map them down to atomic resolution. Commenters called the work a tour de force.

‘[These] structures are the first to be determined by micro-electron diffraction from a molecule of previously unknown structure,’ noted Yifan Cheng at the University of California, San Francisco, in an accompanying Nature commentary. Others were similarly impressed. ‘To obtain a structure of this quality from a peptide material with such tiny crystals is a remarkable feat, and will probably serve as the model for many other studies,’ Gregory Petsko at Weill Cornell Medical College in New York told Alzforum. Tim Bartels at Brigham and Women’s Hospital, Boston, agreed, ‘The resolution here is unprecedented.’”

Important three-dimensional spatial features such as depth and surface concavity can be difficult to convey clearly in the context of two-dimensional images. In the area of macromolecular visualization, the computer graphics technique of ray-tracing can be helpful, but further techniques for emphasizing surface concavity can give clearer perceptions of depth. The notion of diffusion accessibility is well-suited for emphasizing such features of macromolecular surfaces, but a method for calculating diffusion accessibility has not been made widely available. Here we make available a web-based platform that performs the necessary calculation by solving the Laplace equation for steady state diffusion, and produces scripts for visualization that emphasize surface depth by coloring according to diffusion accessibility. The URL is http://services.mbi.ucla.edu/DiffAcc/.

In a new PNAS article, members of the UCLA-DOE Institute, Andrew AhYoung, Pascal Egea, and Joseph Loo, together with Jiansen Jiang, Jiang Zhang, and Hong Zhou,  have offered further elucidation on the structure and function of the conserved SMP domains in the ERMES complex.

The new article asserts the roles played by conserved SMP domains of ERMES in the tethering of mitochondrial and endoplasmic reticulum membranes and the essential exchange of phosholipids, such as phosphatidylcholines, between the two organelles.