The X-ray and EM Structure Determination Core enables access to sophisticated equipment and technologies, offers advice, training and technical assistance in crystallization and sample preparation for CryoEM, MicroED and X-ray diffraction, data collection, processing, atomic refinement, modeling, publishing and data deposition. The core provides services of exceptionally high technical sophistication, with access to consultation and data analysis.  The dedicated staff is trained to accelerate, enrich and educate structural and non-structural biologists to use imaging techniques including electron and X-ray diffraction and cryoEM. The breadth of skills and knowledge of the staff and PIs in the IGP allows us to apply any of our 3 imaging technologies as needed.  The state-of-the-art resources enable the detailed 3-D analysis of biological macromolecules that play essential roles in the plant and microbial systems under investigation.

The core plays a major role in driving EM innovation and dissemination of high-resolution imaging methods; EM innovations contribute to all three projects. IGP PIs are important contributors to new EM developments, particularly the projects concerning MicroED and single-particle scaffolding for small proteins, both within the Enabling Capabilities area.

The X-ray and EM Structure Determination facility occupies 2200 square feet in total and is located in Boyer Hall. Rooms 105 and 136 are dedicated to CryoEM and MicroED, Rooms 106 and 124 are dedicated to  sample preparation, characterization, crystallization screening and X-ray diffraction.

The cold room also is equipped for crystal growth and mounting of heat-labile crystals. The compressors and water recirculating coolers used to remove heat from the x-ray generators are kept in the small room 116, to isolate the noise from the rest of the facility.

The facility operates in two modes:  In the first mode, trained users carry out all aspects of the crystallography experiment from crystallization to data collection and analysis.  In the second mode, a member of the X-ray facility assists the researcher in the steps of structure determination in which he is inexperienced. Every year, approximately thirty graduate students and new postdoctoral fellows are trained through classroom and laboratory instruction. Students grow ProteinaseK crystals and receive introduction on data collection and reduction, cryocrystallography, and model building and atomic refinement.

The X-ray Crystallography and EM Structure Determination facility dates to the late 1970s.  It gradually grew over the years with generous support from the National Institutes of Health (1980-2006), the Department of Energy (1993-present), and UCLA. In 1980, the facility operated with two Elliott GX-6 and one GX-21 rotating anode generators, equipped with several precession cameras and an oscillation camera.  In 1981, Richard Dickerson joined the UCLA faculty and brought with him a Nicolet diffractometer.  In 1983, a multiwire area detector was purchased from San Diego Multiwire Systems (Serial Number 001), and in 1986 a second multiwire panel was added and shifted to a new Rigaku RU-200 generator.  In 1987, the Nicolet diffractometer was replaced with a Rigaku AFC-5, and in 1989 a Rigaku RU-200 was purchased for precession camera work.  In 1991, a RAXIS-II imaging plate was installed for use with the newest generator.  Most of this equipment was purchased with NIH funds, with matching funds from UCLA.  In 1993, the UCLA-DOE Lab was refocused within a new Division of Structural Biology and Genetics, and DOE funds permitted purchase of a second RAXIS-II with double collimating mirrors.  In 1996 an RAXIS-IV with mirrors was installed, and the multiwire system was phased out. In 1999 with support from the Keck Foundation, a high flux x-ray FRD generator with confocal mirrors and goniostat and a Quantum-4 ADSC charged coupled device (CCD) with confocal mirrors was installed. In 2009 a High Flux Rigaku FRE+ generator was installed with two Rigaku HTC imaging plates using funds from NIH, DOE and HHMI. In 2000, the Facility recruited a superb teacher-scientist, Dr. Michael Sawaya, whose duties include working with students and postdoctoral fellows in determining crystal structures. In early 2005, the DOE facility pioneered techniques to mount single microcrystals, too small for conventional data collection, but well-suited for newly-developed microfocal X-ray beams at synchrotrons (APS-24-ID-E and ESRF-ID-13). These techniques are still in use today.  In 2010, the advent of X-ray free-electron lasers (XFELs) with their ultra-intense X-ray pulses prompted the facility to develop methods to prepare even smaller (~500 nm), in vivo-produced crystals for diffraction at LCLS (Stanford) and SACLA (Japan).  The facility achieved the first reported success of de-novo phasing at an XFEL by isomorphous replacement and proved it was possible to determine atomic resolution structures from crystals harbored in live bacterial cells.   In mid-2015 the staff at the facility began exploring the use of electron diffraction to determine atomic resolution structures from peptide crystals, so small that they are invisible by conventional light microscopes. The facility developed sample preparation techniques, and produced a pipeline for indexing and integration of electron diffraction data. 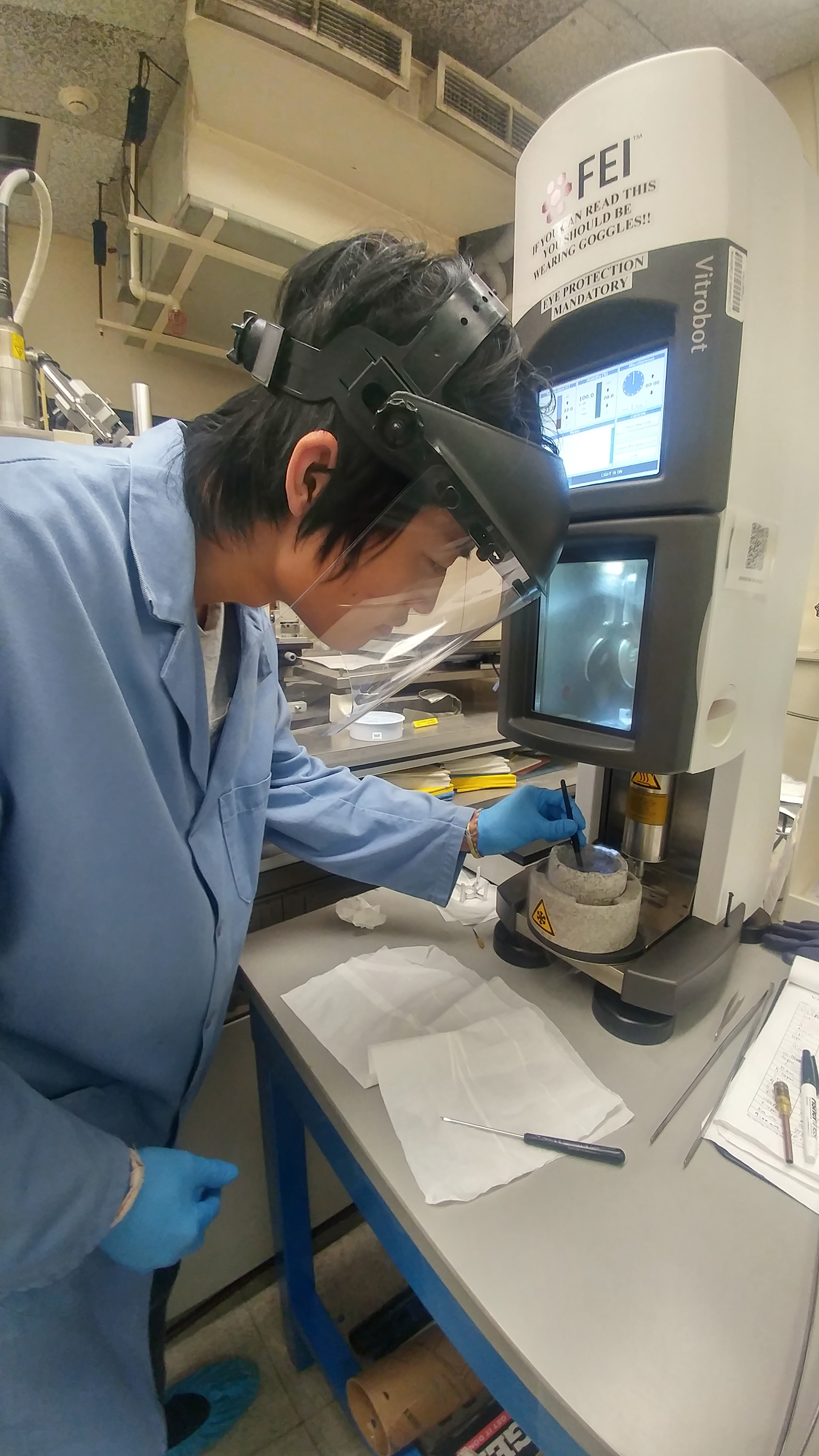