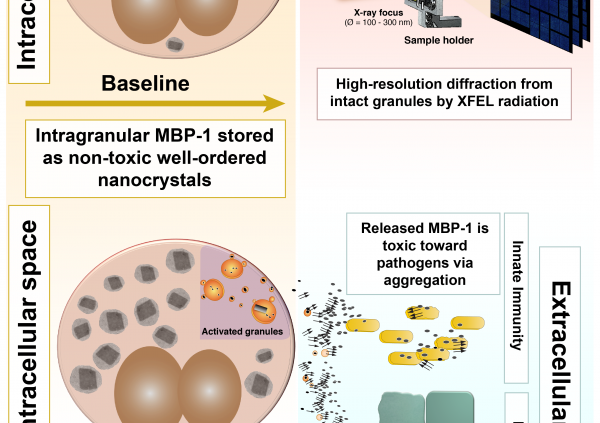 Eosinophils are white blood cells that are part of the body’s innate immune defense against pathogens. Once an infection occurs, eosinophils are activated and migrate to the infected tissue where they contribute to kill the invading microorganisms (bacteria, viruses or helminths) by secreting a number of toxic proteins, including the Major Basic Protein (MBP-1).
While eosinophils are typically maintained at very low numbers in blood, in certain diseases, such as allergies, bronchial asthma, eosinophilic esophagitis or other eosinophilic syndromes, a highly increased number of cells is present. In these diseases, eosinophils can be aberrantly activated and infiltrate organs where, by releasing MBP-1 and other toxins, they can generate substantial tissue damage.
The Eisenberg lab co-led an international collaboration of scientists from over 10 different institutions to elucidate the details of how the powerful MBP-1 toxin is safely stored inside the eosinophil cell as well as the mechanism of its toxicity upon extracellular release. The findings were published this month in Molecular Cell.

In the article, the team shows how MBP-1 is stored inside the cells as small nanocrystals that restrain its toxicity to ensure safe storage. The nanocrystals were studied within their cellular environment by illuminating them with an x-ray free electron laser (XFEL) at LCLS in Stanford. Use of the XFEL source was critical to success. The cutting-edge XFEL technology, first made available only 5 years ago, provided a combination of high brilliance and micron focus unmatched by conventional synchrotron x-ray sources. The team revealed that the MBP-1 molecules were packed in an arrangement different from that observed from in vitro-grown crystals. These differences might be important in explaining how the crystals evolved sensitivity to specific environmental changes that would trigger its dissolution and release of toxin at the appropriate time.
In addition, the team analyzed how the crystals dissolve upon eosinophil activation and discovered that MBP-1 becomes toxic toward pathogens when secreted by forming amyloid-like aggregates. The researchers showed that it is possible to significantly inhibit MBP-1 toxicity and rescue bacteria viability by interfering with the aggregation process.
Yet, this same mechanism that helps the body to fight infections is also causing “collateral damage” in eosinophilic syndromes by striking the body’s own tissues. The authors showed how amyloidogenic aggregation is also mediating MBP-1 toxicity toward host tissue. Again, by interfering with MBP-1 aggregation they could arrest this phenomenon and preserve mouse and human skin from MBP-1-mediated damage.
Finally, the team determined the atomic resolution structure of the highest aggregation propensity segment of MBP-1, which can now potentially be used as a template to design specific peptides to block aggregation. This could represent a novel therapeutic strategy to limit eosinophilic-mediated immunopathology in these diseases.