Single particle cryo-electron microscopy (cryo-EM) has become a popular structural biology tool, enabling many targets such as viruses, large protein complexes, and oligomeric membrane proteins to be resolved to atomic resolution. Cryo-EM relies on the accurate assignment of particle location and orientation from intrinsically noisy projection images, a procedure that becomes more challenging for smaller proteins due to their lower signal-to-noise ratios. Although most cellular proteins are less than 50 kDa, so far just a few amenable cases have been solved by cryo-EM.  Recent efforts to break through this lower size limit include engineering large scaffolds to rigidly display multiple small proteins for imaging. The inherent challenges and future design efforts are highlighted in this article.

One strategy for circumventing the size limitation in cryo-EM is to attach a smaller imaging target to a larger macromolecular structure known to be amenable to imaging; the former can be described as the ‘cargo’ and the latter as the ‘scaffold’. While the idea of attaching a smaller protein to a larger scaffold seems straightforward, serious technical challenges arise, including most notably flexibility. If the attachment between cargo and scaffold is completely flexible, then the presence of the scaffold provides little help in narrowing down the position and orientation of the cargo, as required for its image reconstruction. Even moderate degrees of flexibility can have major confounding effects. Genetically fusing one protein to another generally results in highly flexible arrangements, owing to effectively free rotation about the phi and psi backbone torsion angles at the point of fusion. Similarly, covalent attachment between proteins by way of chemical linkers generally introduces single-bonds between the components, and this also allows potentially problematic degrees of rotation. These issues point to a further concern for scaffolding approaches in the molecular engineering effort required. To avoid laborious molecular engineering work and provide the most utility, an ideal scaffold would provide a facile route for rigidly attaching diverse cargo molecules for imaging, without extensive re-engineering.

In 2018, Liu et al. designed a new protein scaffold to simultaneously address the key issues of flexibility and modularity that had limited previous studies. In this work, a modular adaptor protein, Designed Ankyrin Repeat Proteins (DARPin), was fused to an engineered tetrahedrally symmetric (n=12) protein complex, using a continuous α-helical connection to promote rigidity. Through selection experiments on libraries of DAPRins bearing sequence variation in their loops, DARPins can be obtained to bind diverse cargo proteins with high affinity and specificity, and with retention of their structural integrity in the bound state. By fusing to a tetrahedral complex, each particle contains 12 copies of the DARPin adaptor; the polyvalent nature of the scaffold provides multiple sites of attachment, and therefore multiple independent views of the cargo from a single particle. High symmetry, to the extent that it is preserved in the assembled complex, provides further imaging advantages through symmetry-averaging protocols.

Two recent studies have tested DARPin-based helical-fusion scaffolds for their ability to resolve the structures of bound cargo proteins. Liu et al. (2019) used GFP as the first cargo for their DARPin-tetrahedron scaffold. Some smearing effect of the density for the GFP was evident, caused by minor flexibility around the shared alpha helix.  The 3-D reconstruction reached a local median resolution of 3.8 Å for the GFP, where notable atomic details were evident. Qing et al. independently explored a series of different symmetric scaffolds as cores for fusion to a DARPin adaptor, and found the best results using D2 tetrameric aldolase. The DARPin was fused again through a continuous α-helix. The authors showed that the continuous α-helix scheme led to more rigid and better behaving scaffolds than their experiments where adaptor proteins were inserted into flexible loop regions of scaffold core proteins. Coincidently, the two groups of researchers both chose GFP as the first test cargo, so the true modularity of such systems awaits experimental verification from the cryo-EM community. 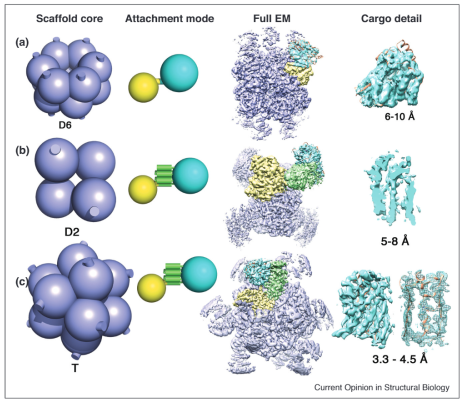 Experiments are ordered from top to bottom by resolution achieved for a bound/attached cargo protein, based on data from (A) Coscia et al, 2016; (B) Qing et al, 2019; (C) Liu et al, 2019. The geometry of the scaffolding core is shown in lavender on the left, with the symmetry type indicated; the cylindrical stubs denote the protruding terminal alpha helices present on the scaffold core subunits in all the cases described here. The mode of attachment for each scaffold is diagrammed to the side, with one protein subunit from the scaffold core shown highlighted in yellow. The middle (B) and bottom (C) scaffolds are modular, with the adaptor protein (DARPin) in green fused to the core subunit through a continuous alpha helix. The cyan sphere indicates the cargo protein for imaging. Density for a complete EM reconstruction is shown, colored according to the same scheme as on the left, with a focus on the density around the cargo proteins (cyan) shown on the right. The underlying atomic model is shown in orange in select cases. For scaffold B, and the right-most image for scaffold C, the cargo EM density is shown as a slice through the beta barrel of GFP to emphasize structural details evident there.